The world of industrial robots 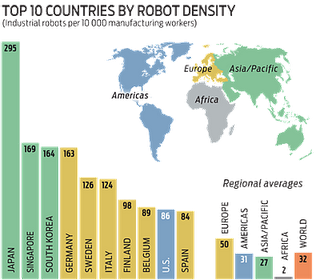 Robots are industrial tools widely used nowadays. More than one million are working throughout the world, mainly in Asia (50%), Europe (31%) and North America (14%).

But what is an industrial robot after all?

It generally has an articulated arm, a switchgear cubicle, a dimmer and a programming language. Programming is a key elements for robot because one robot can do very different works according to how it is programmed.

The first industrial robot was created in 1950 in the US. It was called Unimat and used for the needs of the nuclear industry. The first modern robot was made by KUKA in 1973: the KUKA Famulus. It was the first 6 axes robot. 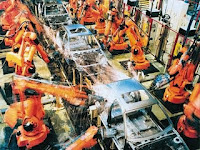 Over the past 20 years, the price of robots has been divided by 4 which made the number of robots working grows quickly. They are used for a lot of different industries and the most known one is the automotive industry.

Read also:  Laser cutting, how to choose your laser source

Here is an example of industrial robots in the automotive industry

How to buy a robot?

The main technical characteristics for robots are the reach, the capacity and the programming language.
The main brands are KUKA, ABB, FANUC…
If you are looking for robots to buy, do not hesitate to check used industrial robots for sale on the marketplace for used machines Exapro.

Unlike machines, humans make mistakes. And when buying a used industrial machinery, a bad choice can become quite sensitive, costly...