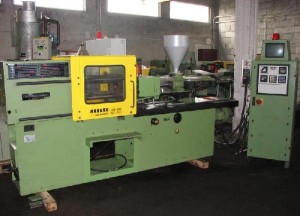 Are you looking for a used Arburg Allrounder? Find out more than 45 injection moulding machines of this model on Exapro!

See all Arburg Allrounder for sale!

A few words about Arburg

Created in 1961, the Allrounder principle was developed after different improvements realized on the previous models of the manufacturer Arburg. It is a production process that allows the injection of shaped parts to be produced in ten different positions of work.

We can differentiate several Allrounder models : with electric power, hybrid (electric and hydraulic), hydraulic and finally the vertical model with a rotary table. Depending on the model, you would obtain results that could vary in terms of exactness and especially of manufacturing speed. But the difference is mostly made on the energy costs. However, all the machines work with the same software named Selogica that ensures the good progress of the operation by the machine.

– Flexibility in the processing

– Full use of the productive potential of the mould

See all Arburg Allrounder for sale!

As always, buyers can find some very interesting machine tools on Exapro.com, whatever the month of the year is. September 2018 is...